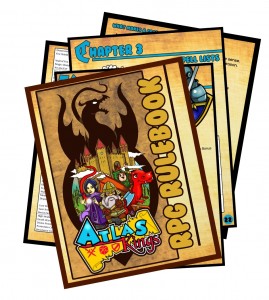 Well I gave copies of the book to my three kids (girl 7 years, girl 9 years, and a boy 12 years) for Christmas. All of them read it front to back! My girls especially ate it up and were ready to play and constantly asking me to run it for them. Soooo, we ran a Dark and Scary Night. THEY LOVED IT! I have played with them before with my own simplified version of the Worlds Oldest Fantasy RPG, however, they really enjoyed reading the book and the feeling of knowing the rules. In fact they quoted me the rules as we were playing. Today, my son told me he had read the book and already designed an adventure for my girls and I to play out with him. He did this on his own and I had no idea he wanted to Game Master until he told me about his idea today. Another Kickstarter of Spells, Treasure, and Monsters in the same vein as the rule book with similar art would be a great idea. I know all of my kids would love it. So I just wanted to say thanks Hal for taking an idea I’m sure every Gamer Parent may have had and turning it into a reality. Thanks,