Malum Morbus was a prophet of doom at the end of the Age of Runes. He foretold of the coming of the flood that would destroy the world. He led a group of Grables that planned and prepared for the cataclysm They built a huge ark to house their group and their livestock. When the floods came, Malum was validated and his flock began to worship him as a god. 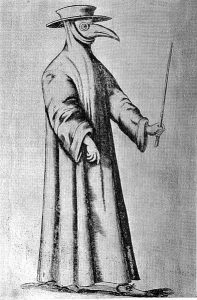 Unbeknownst to his followers, Malum was actually a refugee from God’s Law and the Cult of Chaos. During his time with the Cult, he learned to summon and control disease spirits. When the Cult fell, he escaped to the south and served as a plague doctor curing towns he infected with disease spirits in exchange for payment.

His travels led him to Wheland where he fell in love with a fairy princess more beautiful than any creature he had ever seen before. She, like most fairies, hungered for the laughter and merriment of children to fuel her dark fairy magic. Malum stole children for her and brought them to a cave where she would play with them, laugh with them, and feed them sweets.

When the children got tired and complained, she would kill them and give their bodies to ogres to eat. The Pied Piper legend formed during this time as Malum carted off hundreds of kids never to return to their families again.

Eventually, the fairy princess grew tired of Malum as well.  She left him to return to the land of Eyre. In parting, she told Malum not to be sad because all of humanity would be drowned soon any way.

Hardly a remedy for his depression, Malum moved from Wheland back to the southern provinces of the Grable Empire to sulk.

When the Beast returned, Chaos called for Malum to join his forces again. Malum obliged, but told the Beast that everything was for naught because though the Beast might conquer the world, the lands would soon be flooded and the world would end.

The Beast’s power did not extend to the fate rune, so he could not determine if Malum was a true prophet or not, so he decided to hedge his bets. If the world was to drown, then chaos must figure out a way to survive. He tasked Malum with this task, the preservation of chaos in the face of calamity.

Malum constructed an ark and his initial thought was to be like an evil Noah and preserve a mated pair of each type of chaos creature so that the line of monsters could continue. As news of The Beast’s triumphs came to him, he began to wonder though. If the world was to drown, who would drown it?

Ever a contrarian, he began to think that the reason the world would drown was to kill chaos, not humanity. Those powerful enough to drown the world would likely find his ark and sink it. He needed a cover so he hatched a daring and brilliant plan.

He made himself a prophet proclaiming that waters of cleansing would come to wash chaos off the shores of Oklos. Men and women desperate for any hope flocked to his message of purification. They helped him build his ark.

Malum taught his followers that the only means of survival was to sacrifice their first born children to create a magical stain that would preserve the ark through the fiercest storms and floodwaters. They followed his orders and painted the hull of the ark in their own children’s blood. This despicable act weakened any defense against chaos they might have had.  Disease spirits possessed them and the ark became a plague ship.  When the floods came and Malum’s prophecy proved true, Malum’s followers smuggled chaos into the next age in the form of pestilence.

Once the floodwaters subsided, Malum’s followers created several leper colonies throughout the Vescalian peninsula. There, in relative secrecy (healthy people shunned these places), they sought to bring back the chaotic races.

Malum sailed to Abèl. In those lands, he learned the art of embalming and mummification. He bought slaves and marched them across the Chaos Waste to where the Beast’s body laid. There he had the slaves build a step pyramid with a temple on top. He sacrificed all the newborns birthed by the slaves upon an altar built at the top of the ziggurat. Using the magical power gained from the sacrifices, he transformed the adult slaves into mummies. With his undead army of incredibly strong, scary warriors whose very touch caused a withering disease, Malum threatened to conquer all the pharons of Abèl.

The Pharons in desperation gave up their lands to the angels of Pupta, the raksha, and were able to halt Malum’s advance.

Throughout the Age of Chaos, Malum Morbus was a major player in the world of chaos. His worship expanded to all lands. Each new plague or calamity brought worshippers into his fold. Witches and wererats were often his agents. Each new priest would need to steal a child and sacrifice it. A high priest would need to sacrifice a child of royal blood.

Now, since the fall of the Beast, Malum Morbus’s whereabouts are unknown. It is known that Malum did not fall during the war and the unknown location of this charismatic leader gives the forces of good in the world more concern than many of the more “active” threats. Scholars, priests, and wizards will use his human name. Soldiers, tradesmen, and common folk are more prone to use the local nickname when referring to Malum.