Demogorgon is older than the death rune.  He is the very notion of murder.  The inkling to end the life of another for no other reason than one would prefer it that way.  No vengeance, no heat of passion, no dispute, just cold blooded murder. 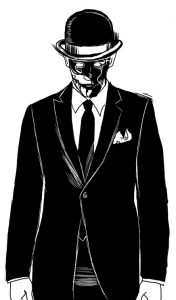 When Mith discovered the death rune at the Dawn of Time, Demogorgon sought to be its master.  But death has noble purposes as well as malicious ones and Hadron embodied the honor that comes with death.  Demogorgon and Hadron met on the field of battle for control of the rune plane, but in open battle it was no match.  Demogorgon was the assassin while Hadron was the champion and the noble warrior made quick work of the shadow hugger in the contest.

Demogorgon retreated from the field in shame.  If he was not death, then what was he?  He floated through space debating his very essence of being.  During his aimless travels he happened upon Grinder and witnessed the primordial destruction of all things.  Demogorgon was terrified of Grinder at first, but then found himself in awe of its destructive power.  When Grinder spoke to him, Demogorgon fawned.

“What is it you want, little flea?” Grinder said.

“I want to serve you, but I don’t know how,” Demogorgon replied.

“Then you can serve me, but I am not one to create, I am one to destroy.  You must figure out how to serve me for I only know how to kill you.”

“What does Mith hate most?”

“Mith hates chaos because it warps and distorts what he creates.”

“Who are the agents of chaos?”

“There are none at the moment.”

“Then I will create them.”

“That is good. Call them demons after yourself.”

And Demogorgon liked the name demons.  He set about giving birth to a race.  Though he is known as the Prince of Demons, he is actually their father.

For some unknown reason the father of demons was fiercely loyal to both the Laughing Man and the Beast.  He also continues to serve Grinder because the primal power of destruction gave him purpose.

When the Beast fell to Calgillien, Demogorgon did not return to the Abyss, immediately.  He decided to lead the armies under his command to the island now called Abyssus and conquer the city called Cusa.  There he resides with no one, not even his forces, knowing why.