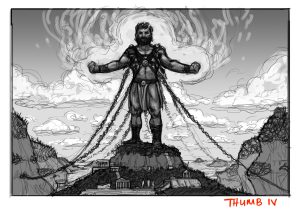 During the Age of Titans, one titan only had taste for truth.  Oklos was his name and he consumed it in feasts of mathematics, logic, and philosophy. This appetite for truth earned him the name Truth Eater and caused a swelling of the law rune within his titanic frame.

Unfortunately, the taste of law caused Oklos to retch and he perpetually had its acrimony in his mouth.  Though a powerful force of law in the world, the Great Titan embraced the Laughing Man and his defeat of Dugrane near the end of the Age of Runes.  Law and chaos aren’t opposing runes in Cora’s Book of Creation and the Laughing Man’s divinity originated from the blasphemous worship of law.  The relationship had promise because the Laughing Man through his charm, wit, and guile made the rune more palatable for Oklos to taste.

When the war with the Grables came, Oklos and his family joined The Laughing Man’s armies and fought against Calgillien’s mobility legion at the Battle of Juniper — the location which is now the site of the city of Brimstone in the country of True Law.   It was Oklos who lifted the side of a mountain and dumped it on the village of Juniper decimating the legionnaires.

The massive rock created a makeshift burial mound for the Grable dead and blood oozed in rivulets down its side.  Calgillien, fighting through tears, used the mobility rune stored in the blood  of the fallen to summon the rest of his legions to the hill for a surprise counterattack.

The Laughing Man’s armies, drunk in celebration of the prior victory, crumbled before the ferocity of the enraged might of the Grable Empire.   Those that could fled with the Laughing Man back across the Ransgal Mountains to the lands of Darkdoven and Twindernight.  To cover their retreat, the Laughing Man betrayed Oklos and his family.  He shot arrows of titan slaying into the Pleiades, the seven daughters of Oklos, to block the pass to cover his retreat.  Oklos crumpled to the ground in grief beside his children.  Calgillien saw him there and took pity on him.  He asked Oklos to move his daughters to a better resting place in order to allow Calgillien’s legions to pass.  Oklos obliged.

For a century, Oklos mourned in the north.  During that time, Chaos returned in the form of the Beast and became invincible in battle.  The armies of chaos rallied to his banner.  Without the great Calgillien to lead them, the Grable Legions suffered many defeats as the Beast drove them east back to their homeland near Tanvarpov.

On the brink of utter defeat, Emperor Jukal sacrificed his rune blood to forge a lance that could wound the Beast.  Riding Tanlavar, the Great Bull, he fought the Beast in an epic duel that raged across land, ocean, and sky.  In the end, either Jukal’s lance or the Great Bull’s horn, pierced the Beast’s heart causing the mile high monstrosity to fall in lands to the south.

Dugrane bound the spirit of the Beast to Hell with a tether of nether metal, but the corrupting power of the mountainous body was so virulent that Hell could not hold it.  A great desert spread out from the carcass named the Chaos Waste and the threat of a resurrection of the Beast remained for an age.  The Age of Runes had ended and the Age of Chaos had begun.

Though the Beast was defeated, his armies remained.  The Grables were too weakened to drive them out of the empire — even Jukal.  The process of forging the lance had drained the fate rune from him leaving the rune of chaos unchecked as it pumped through his veins.  His solution to defeating the Armies of the Beast was one only a Chaos Lord could devise.  He slew the earth beast upon which the lands of the Grable Empire rode. Without the earth beast, the lands sank and the oceans flooded the entire continent.  The armies of chaos perished, but so did civilization.

In this dark time, Oklos broke from his mourning and reengaged with the world.  He crafted a harness of unbreakable chains.  He waded through the seas to fasten the chains to the edges of the sunken lands and lifted them out of the ocean.  This island dwellers of Wheland and Grell witnessed this miracle and named the risen lands Oklos after their savior.

At first, humanity feared Oklos and kept clear of his mountain. But in time, a certain type of person came to admire the endless task he performed for the sake of all of Oklos.  They called him Atlas which means “backbone” or “strong back” in Ancient Grable. They sought to immolate his work ethic through their thoughts and deeds.  They resettled to Atlas Mountain and began to worship the Great Titan.  With time, their prayers began to be answered proving that Atlas was now a god.

An Atlas worshipper will never break his word, not for any reason, so he is unlikely to give it lightly. To imply an Atlas worshipper has broken his word even in jest will cause a slap at best and one’s life at worst. Those
worshippers who live on his mountain are the ones most likely to take such a slight to deadly consequences.

In the last few centuries, pilgrims from around the world have journeyed to Atlas Mountain to pay homage to the “big guy.” The gifts and wealth they brought has led to an impressive temple constructed in Grellic-style at his feet. The priests there concern themselves with Atlas’s strength more than his duty. They body-build, pose-down, and conduct extended flexes where they strain their muscles without moving for days in holy tribute.

The typical Atlas worshipper is much more relaxed than that. They work hard. Take care of their families. Loathe chaos in all its forms. Atlas is an unintrusive god with few tenets. This freedom makes the few tenets he does demand inflexible. An adventurer trying to lawyer their way out of keeping their word will be met even more harshly than those that just plain break it.

To become a cleric of Atlas, one must have strength and will of at least 16 each. If these conditions are met, simple prayer to Atlas will enable channeling of his power. If a character breaks his word voluntarily, however, this power will leave him forever. If a cleric of Atlas loses strength or will below 16 from a shadow, poison, or some other means, they also lose their ability to channel to Atlas.

Scrolls and potions could still be used, however. The reason this power is lost is less about Atlas’s disappointment and more about the deadly effects channeling the Great Titan’s power would have on such a character.

Atlas is primarily worshipped by humans though dwarves and stone giants will sometimes worship the Great Titan. This worship does not prevent these two creatures from warring, however.

Atlas is the dominant religion of southern Polfany and appears in some degree throughout all of Oklos, but the priests of Atlas are few and those far removed from his presence do not know how to worship him. That said, few major population centers in Oklos do not have at least a shrine to Atlas somewhere in town.